Shearing Videos of an Alpaca, Llama and Cria

The shearing crew rolled in at 6:51 am yesterday and an energetic day began.  Within 10 minutes, the first alpaca named Costello was picked up, laid down and shorn. 6 minutes later, on to the next.

The "blanket" of the alpaca is shorn first, covering pretty much where a saddle would go on a horse and a little of the rump. This is the prime fleece, the softest and most often uniform in length.  This fiber, depending on the grade (see below) will create next to skin products such as hats, scarves and mittens. The shearer pushes the fleece off into a separate pile where is it "skirted".  It is set on a table and picked through, removing guard hairs (prickly straight hairs) and vegetable matter (VM), along with other fantastic finds such as burs, sticks, hay, twine barb wire and other horror stories I have heard of found in people's pastures.  Luckily, no major finds in our fleece this year.

Next, the neck and legs are shorn off of the body and put into a separate pile as well. The fleece is a bit more uneven and rarely as soft as the blanket.  This will make socks and great felting materials.  Then, the clean up.  Another shearer takes over to clean up the belly, leg hairs and any "second cuts".  Second cuts are small bits of fiber that are not the same length as the rest of the fiber.  It is essential to get this out of the fleece you are going to use because it will cause "slubs" or bumps and unevenness in your yarn.  Once the blanket is taken away and the neck and legs (called seconds) are separated, we throw all of our "thirds" into a pile and they are put into our compost bin for recycling.  It makes excellent compost. 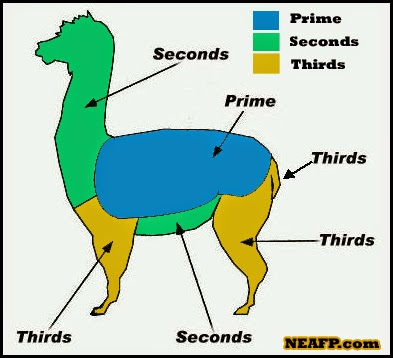 
* A micron is a measurement of length equal to one millionth of a meter and used to measure the width of a single alpaca fiber to determine its fineness / softness. Most human hair is at least 100 microns, 5 times thicker than alpaca fiber

This video shows Isabella, a 2 week old cria with her little broken leg, being clipper cut.  When alpacas are born, the fleece they are born with is burned by the fluids in the vaginal canal.  Thus, it is brittle and fine fleece that acts like velcro to everything for the first year until it is shorn.  The fleece taken off is not usable because it is "tender" or brittle and so short.  It was recommended to us to have at least 2.5" of fleece to go to the mill to be processed.  This fleece will be bagged and people can feel and touch the fiber to see what it feels like during different events we attend.  Her little leg has a hairline fracture in it as of about a week ago, so she is in a pen with her mom Maggie for a few weeks.

This video is of a llama named Mimi. She hasn't been shorn in 7 years, nor her toes or teeth attended to (she does not belong to us). So, she is getting the full llama tune up.


Guard llamas are proud animals and Brooks is at the top of our herd.  To put him down, that would mean he would have to show submission and he does not go down easily.  He is not aggressive, but he is not being cooperative, showing his strength and non-compliance.  Its important to remember we and the shearing crew are as gentle and safe to the animals as possible, but they need to be laid down and constrained for the safety of each and every llama and alpaca.  A 13 tooth electric shearing blade can do damage quickly and massively if not given the utmost respect.    Unfortunately, my camera battery died half way through the shearing, but you will get the idea.  We throw away our llama fleece, as it not the same quality and softness as alpaca.


We are an alpaca farm with 150 quirky alpacas, 10 enthusiastic employees and thousands of amazing alpaca products. After 15 years of experience, we offer hand crafted alpaca products from local knitters, crocheters and weavers - including hats, scarves, blankets as well as high-tech alpaca socks and fabrics. We also sell composted alpaca manure as a rich fertilizer. Alpacas of Montana is a fully vertically integrated alpaca farm and we love designing high quality alpaca products.

Posted by Alpacas of Montana at 6:59 PM