The Anatomy of Alpaca Teeth

The Anatomy of Alpaca Teeth 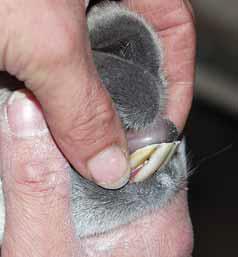 Both llamas and alpacas have inherited their dentition from their wild ancestors. The dental layout and specialization of teeth found in llamas and alpacas is evident in 25 million year old ancestral camelids.Llamas and alpacas have the same number and kinds of teeth (same dental formula): molars, incisors and canines. The significant difference between the two species is that in llamas the incisors (front teeth) are encased in enamel and are not prone to continue growing throughout the animal’s lifetime. However, many llamas are still in need of tooth trimming. Alpacas teeth have characteristics of both llamas and vicunas; they usually have no or little enamel on the tongue side of their teeth and experience continual tooth growth well into adulthood. 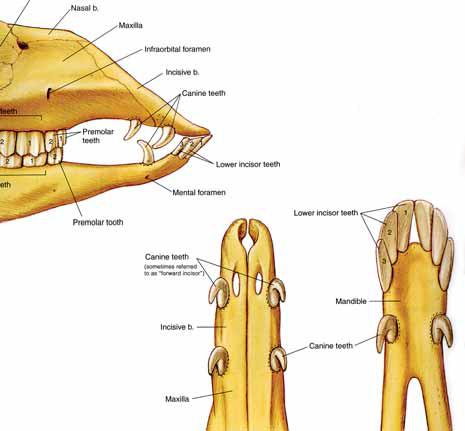 The incisors are designed to procure food. The llama or alpaca grabs a tuft of grass growing from the ground and shuts its mouth on it, pressing the grass against the dental pad (front of top jaw) with its incisors (teeth at the front of the lower jaw). With the grass held firmly, the animal tears it away and eats. In a normal animal there are six incisors at the front of the lower jaw (mandible) and no front teeth at front of the upper jaw maxilla). The incisors are deciduous, meaning they will be shed and replaced by permanent teeth at fairly predictable intervals as the animal ages. Incisor alignment is important. Incisors should close squarely into the bottom of the dental pad at the front of the upper jaw. The relationship to the incisors and how they meet the palate defines how efficiently the animal will be able to procure food in environments. 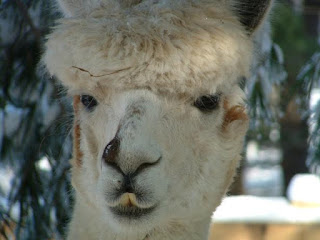 A llama or alpaca with correct dental alignment of the incisor teeth (with the dental pad of the maxilla) will gradually wear them down with normal chewing motion as the teeth come in contact with the dental pad. If the alignment is not good, which typically means the incisors miss the dental pad by protruding past it, the teeth can be expected to grow. Teeth that protrude excessively past the dental pad, sometimes missing it by a centimeter or more, do not allow efficient eating. A long lower jaw is a common defect in both alpacas and llamas and the incisors protruding from it will need to be trimmed periodically.

Molars: There are six molars on each jaw (3 per side) plus premolars. These large grinding teeth are essential to the digestion of food and are found at the back of the mouth. Molars function to pulverize food before it is swallowed and are vigorously used when the animal chews its cud of material brought up from its stomach. In younger animals molars are rarely a cause for concern. However, in older animals periodontal disease, tooth abscesses and uneven wearing can severely impact an animal’s ability to eat properly. Failing molars affect survivability. More attention is being paid to molars as the population of geriatric animals grows in . Molars are difficult to work on, even for the seasoned veterinarian, because they are at the back of a camelid’s mouth and the mouth does not open wide. If a problem related to the molars is suspected, a radiograph is usually the best way to evaluate it. In some instances wear and tear on molars results in molars with jagged tops and poor grinding motion. In other cases uneven surfaces are ground (or flattened, or floated) to bring greater compatibility to how molars fit together when they grind food. Molar abscesses are also challenging and the chances of success are directly related to early detection.

Canine Teeth: The canine teeth, also known as fighting teeth, are present on all adult male alpacas and llamas. They are found in the jaw between the incisors and the molars. While not present at birth they usually begin emerging around 24 months, but may not fully emerge until seven years in some animals. Adult females also have canine teeth which are not usually prominent, but still razor sharp. They are seldom cause for concern due to the temperament of females, and the fact that their canines often barely protrude above the surface. 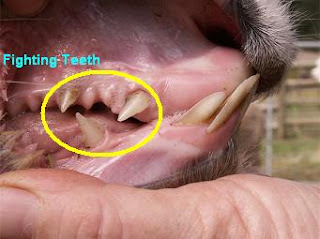 There are two canine teeth on each side of the maxilla (upper jaw), and one canine on each side of the mandible (lower jaw), making a total of three per side. Fully erupted, these teeth curve backward, are razor sharp, and are designed to lacerate an opponent during a fight. In males, canines can measure an inch (2.54 cm) in length. Serious and permanent injuries can be expected if canines are not removed. The teeth are larger on males than females, larger yet on male llamas (and like railroad spikes in Dromedary camels). Because males bite when they fight common injuries are torn or severed ears, permanently damaged tails, lacerated testicles and permanent leg lameness due to severed tendons and ligaments.

Cutting Incisors: Cutting incisors involves more factors than one might imagine. With incisors, the cut should be where the teeth would touch the dental pad if they were the correct length and alignment. Incisors neglected for a long period of time can be quite long and protrude from the animal’s face. Such teeth are unsightly, and less efficient for collecting food than correctly aligned teeth. They are also more prone to breaking off, due to the increased leverage at the end of the tooth as it lengthens. Even teeth that aren’t neglected can become quite thick and difficult to cut, especially in older animals.
Posted by Alpacas of Montana at 2:15 PM