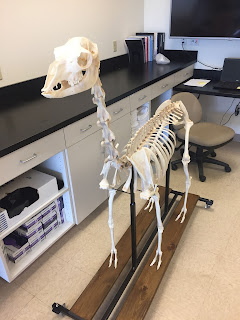 About a year ago, we had to put down Princess Leah, a 19 year old alpaca.  We donated her body to the Montana State Veterinary program where they have since put her as a mount and she is utilized in the program for Anatomy, Histology, Oncology, Pathology, Physiology.  Full mounts of alpacas are rare - they are a less studied species and expensive to put together. 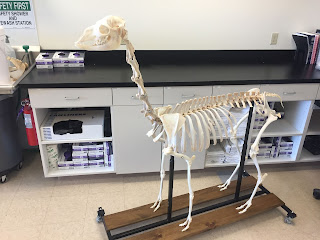 We are so happy that she is able to help educate veterinarians and technicians for years to come. 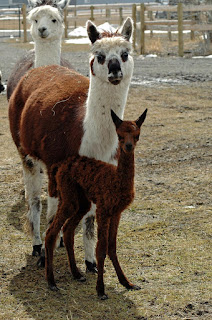 Princess Leah was born in 1998 in Barrhead, Canada, several hours northwest of Edmonton. At the age of 9 she moved to Alpacas of Montana's farm in Bozeman, Montana where she lived to be 19, a relatively old age for an alpaca. She had 8 babies in her lifetime and loved each one dearly. Weaning always came with great difficulty because she was so connected with each of them. She is shown with her 6th baby Calibash in the photos at 2 days old. 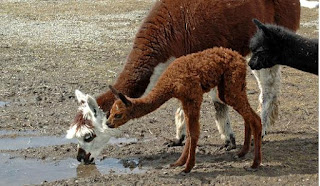 Near the end of her life she began to move slower and was unable to keep up with the herd. The full extent of her sickness could not be known until after she passed away. She was loved greatly by all of us.
Posted by Alpacas of Montana at 4:02 PM

Turmeric for camelids and alpacas

NOTE: Commercial turmeric capsules/pills containing high doses of curcumin, are NOT RECOMMENDED for use with animals

Turmeric is a powerful anti-oxidant, pain relieving, anti-viral and anti-bacterial spice that can be fed successfully to animals as well as humans

PLEASE NOTE: There are 3 basic ingredients you need to unlock the healing power of turmeric and we suggest you click here to find out more about it before continuing.

How to Feed Turmeric to your Animals

Cats can be fussy!! For a guide to quantities, see above.
Others prefer to feed the paste use a syringe or pipette for their cats.
Another popular way is to put a bit of paste on your cat and let your cat "groom" it in.

Ruminants include goats, sheep, cattle, camels, deer, alpacas etc.
Because of their many stomachs and ability to gain benefit from food by digesting more than once, it is wise to start in very small incremental doses.

One feed a day is sufficient for ruminants, about a teaspoon of turmeric powder

Mix with regular feed and dampen to adhere. These animals do NOT need much oil because organisms in the rumen make their own short-chain fatty acids to absorb curcumin and ruminants use turmeric very efficiently.
Ginger is also good to feed ruminants and while small quantities of ginger are effective I have seen a kg of ginger rhizomes fed daily.

Similarly for birds and small animals, a pipette is often the easiest solution.

By Dr. Doug: Turmeric Life
Posted by Alpacas of Montana at 4:55 PM

What to Consider when Setting up your Alpaca Farm

SETTING UP YOUR ALPACA FARM
By: Salt River Alpacas

One of the primary topics we are asked about when prospective alpaca owners come to visit us is how we chose to set up our alpaca area, what we like about the set up, and what we’d do differently if we had to start all over again. Making the investment upfront to have an organized layout with the proper tools on hand will save you time and money in the long run, and allow you to focus on the most important aspects of your business – your breeding program and the marketing of your products! The information below sets forth some suggestions and features to consider. 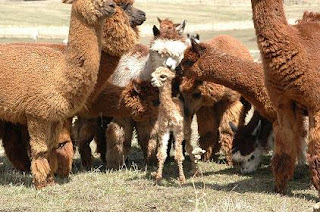 Planning your farm layout and your barn layout can be a fun and exciting event, but it can also be an overwhelming process. We encourage everyone to really look at the layouts of the various farms you visit in addition to looking at the animals. Talk to the owners about their set-ups as each one will be different and you will get lots of great ideas for starting your own farm project.


We are an alpaca farm with 150 quirky alpacas, 10 enthusiastic employees and thousands of amazing alpaca products. After 15 years of experience, we offer hand crafted alpaca products from local knitters, crocheters and weavers - including hats, scarves, blankets as well as high-tech alpaca socks and fabrics. We also sell composted alpaca manure as a rich fertilizer. Alpacas of Montana is a fully vertically integrated alpaca farm and we love designing high quality alpaca products.

Posted by Alpacas of Montana at 11:04 AM

Throughout our Montana seasons we need to rotate pastures to accommodate our alpacas and llamas as one field is eaten up after another.  Camelids are ALWAYS excited to explore a new pasture and today was no exception.  The Lucy the Llama checks out the new digs as a livestock protector, as do our three Turkish Anatolian Livestock Guard Dogs Chilli, Finn and Hazel. The 3 month old baby alpacas run up and down the ditch line then across the bridge as the older females focus on the new, fresh grass in the pasture.

Posted by Alpacas of Montana at 10:37 PM

Weaning can be an extremely stressful time for dam, cria and owners! However, we often make it more traumatic for all concerned because of lack of thought and planning. While most cria are ready for physical weaning at 6 months old, both they and their mother have a strong emotional bond. 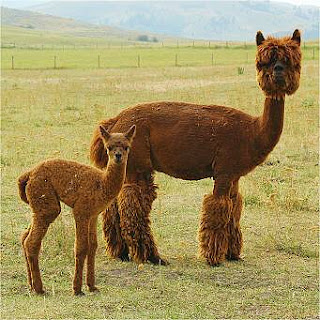 Do not assume that weaning will always occur naturally if the pair are left together. Many new owners assume that a pregnant mother will cease to feed her cria as it grows older, or that the cria will take that step. It usually doesn’t happen! Experience industry-wide has shown that not only will cria not wean themselves, but that the subsequent cria is placed at risk by allowing older cria to remain with mother – with death by starvation occurring when the older cria steals the colostrum or milk the cria needs. Also, the mother’s welfare requires her to “dry off” for 5-6 months before the birth of her next cria- it is extremely draining on a females vitality to maintain an advanced pregnancy plus feed a large cria.

Once the decision to separate the cria is made, it is removed from the mother to a place where he is in the company of familiar alpacas, ideally with other cria the same age. Some farms prefer that the cria is out of sight and sound of its' mother, however, if you have a small property this may not be possible. In this instance, keep at least two fences between them (so you have a paddock separating them). Another alternative – providing you have higher than average fencing such as camelid or deer fencing (a cria will climb or jump over a normal height fence in order to get back to its mother) – you may be able to wean him/her within visual distance of the mother. Even so, this is not as good as complete separation as the cria will mope over the fence, and take much longer to accept the separation. The risk of an alpaca becoming entangled in a fence when only one fence separates the pair must also be taken into account.

If you are unable to adequately separate cria and mother on your property, it may pay to remove the cria from your property altogether and bring the cria back after 6 – 8 weeks when weaning has been achieved. Most females will not allow a weaned cria to feed after this period of time – however, there are some who will allow their cria to start suckling again, so you must be vigilant that this does not happen. If it does, simply separate mother and cria again – the grieving process will have been completed and most cria will no longer attempt to scale a fence between them and their mother, so there should be no need to take them off your property if you can’t get at least two fences between them.
As soon as you are sure the mother is not allowing the youngster to feed, they can be reunited. The baby is now independent in terms of food, but still has the security of a mother to rest by and the mother is usually happy to have the company without the demands of feeding; this creates an emotionally stable alpaca that is an asset to your herd. However, bear in mind, that keeping an entire male in with a female herd can create the risk of an unwanted pregnancy – although most males do not become fertile until sometime after 2 years of age, it is not unknown for precocious males to sire cria at just 9 months of age! And some 6 month old males can already be attempting to mount females.
We usually maintain a separate “male” herd which includes young males destined for either a stud career or castration. This prevents the danger of unwanted pregnancies, and allows the young male to learn proper alpaca herd behaviour, and our young males join this herd as soon as they are weaned. The adult males never hurt or bully them. 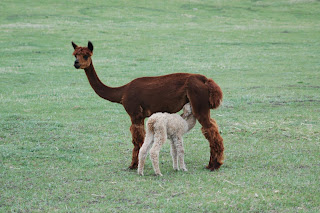 If you have returned your cria to your female herd, then as birthing time for a subsequent cria approaches, it is often wise to separate the two until well after the new cria has bonded with its mother. This is because the female alpaca will start coming into milk several days before the birth of her new cria, and her yearling offspring may attempt to renew suckling – and the female, because of her changing hormones, will likely let her. You don’t want your yearling stealing the colostrum so vital for the new crias health! After the mother has bonded with her new baby, it is unlikely she will allow her older offspring to suckle, so after 3 – 7 days you can reunite the family. We have had no problem with this reunion, but every animal is different, so it pays to keep an eye on the situation until you are sure Mum is feeding only her new cria. If in any doubt, separate the older offspring again!

Remember when any form of separation occurs, alpacas need company! If you have a whether, put him in the same paddock as the animal you are weaning – this adds to the baby’s sense of security. A good-natured female can also be used for this purpose.

Posted by Alpacas of Montana at 6:01 PM